Electricity is an excellent invention. It is a hugely versatile form of energy and can be produced in many different ways. At the same time as the world is electrifying, demand for it is growing. Electricity must be produced without harming the climate or the environment.

Wind and hydropower harness kinetic energy and solar energy harnesses the sun's rays. The different forms of electricity generation often complement each other.

On this website, we compare emissions, waste and other environmental impacts from electricity generation. In particular, we look at the characteristics of spent nuclear fuel.

How is Finnish electricity produced?

Learn about the characteristics of different forms of electricity generation and their relative shares in Finland.

A nuclear power plant produces a huge amount of energy evenly and safely around the clock. Its production is predictable and reliable. Nuclear power is an efficient and climate-friendly way to reduce dependence on imported energy and reduce greenhouse gas emissions - in other words, to produce clean energy.

Hydropower produce emission-free electricity, whose production can be easily adjusted to demand. The environmental impact of hydropower is mainly due to the damming of watercourses. There are no plans to build more hydropower in Finland.

Finland currently imports from abroad about one fifth of the electricity they use. We have a structural dependence on imported electricity, which is a bad thing. The only way to get rid of this dependence is to build more of our own electricity generation.

A significant part of Finland's renewable energy is biomass, such as wood or wood chips. In energy production, biomass is mostly used to produce heat. It is also used in plants that produce both heat and electricity at the same time. On the one hand, burning biomass releases carbon dioxide, but on the other hand it is sequestered by the growth of new tree cover. One of the limits to increasing the use of biomass is the large quantities of fuel it requires.

Coal is the most used coal in the world fuel for electricity generation. However, its use in Finland has been steadily declining in recent years. Coal is readily available and affordable, and it can be used to produce electricity reliably. Coal combustion causes significant emissions of carbon dioxide and fine particles.

Peat is mainly used for combined heat and power production. Peat is a domestic fuel that reduces energy import dependency and creates domestic jobs. However, its combustion has the same climate impact as coal.

Natural gas is less harmful than other gases fossil fuels, as its combustion does not emit sulphur dioxide, particulate matter and heavy metals. However, it does emit greenhouse gases that contribute to global warming. Natural gas is imported into Finland from abroad.

Wind power is a climate-friendly, renewable form of energy. However, it is dependent on weather conditions and needs a partner in the form of regulating power to generate electricity when there is no wind. In addition, its production requires a lot of land area in relation to the amount of energy produced.

In Finland, a large proportion of waste is recycled. By incinerating mixed waste, the energy contained in the waste is converted into electricity and heat. Waste incineration produces carbon dioxide and particulate emissions, but it also prevents waste from going to landfill.

How does electricity generation affect the climate?

Carbon dioxide is essential for life, but if there is too much of it, it becomes a problem. Too much carbon dioxide in the atmosphere causes global warming, which has a number of harmful effects worldwide.

Around two-thirds of humanity's greenhouse gas emissions come from energy production, which relies on the combustion of more than 85% of fuels. This combustion releases carbon dioxide into the atmosphere.

The annual carbon dioxide emissions from fossil energy used by humanity amount to nearly 10 billion tonnes. Global warming must be stopped below 2 degrees Celsius. This means that almost all combustion-based energy production (including transport fuels) should be reduced by several percent every year and stopped altogether after mid-century.

But so far, after 30 years of climate work and negotiations, atmospheric CO2 levels have continued to rise and are not even slowing down. 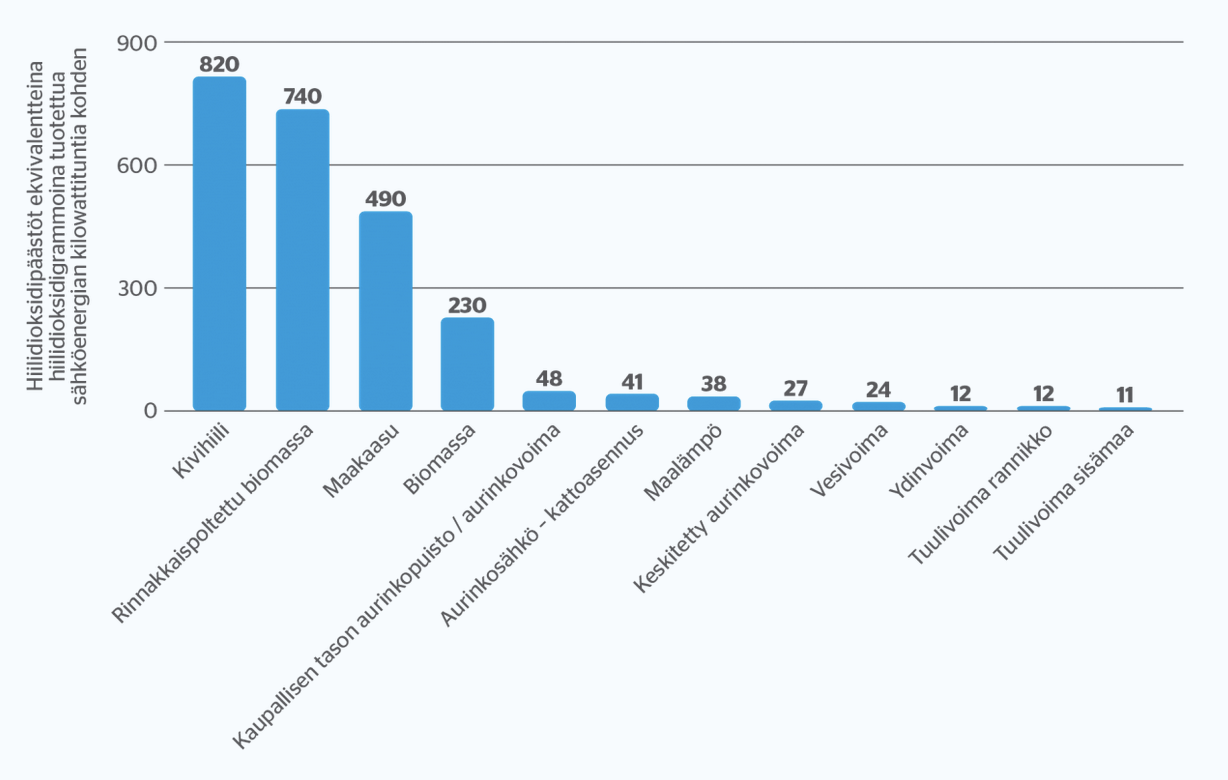 Much of this can be utilised in combined heat and power (CHP), but this requires a nearby heat source, such as a district heating network or a suitable industrial plant. If there is none, the heat is discharged into the environment, either into nearby water or into the air.

There are many sources of harmful fine particles in the air, of which the combustion of fuels is one of the most significant. In Europe alone, a recent report (Europe's Dark Cloud, 2016) estimates that coal combustion causes more than 22 000 premature deaths every year (2013 data).

In many Western countries, combustion plants are regulated for fine particulate emissions. However, according to a recent report (2016 ), this regulation is plagued by inefficiencies, with more than half of Europe's coal-fired power plants exempted from polluting above the IED 2016 emission limits that came into force in 2016. Exemptions are therefore more the rule than the exception. If the whole world switched to nuclear power and other clean energy sources, these victims could be avoided.

How is waste from electricity generation treated?

All energy production generates some waste, but crucially:

Ash from coal combustion is one of the largest industrial waste streams in the world. It contains highly toxic substances such as arsenic, cadmium and mercury. It also contains some radioactive substances.

Coal ash is used, for example, as a filler in road construction and in the production of cement, concrete and asphalt. More than 700 million tonnes of coal ash are produced worldwide each year, of which more than half is recovered.

Ash is also produced from other solid fuels, such as wood and peat. It is more difficult to find a useful use for it. It can even end up as hazardous waste in landfills.

Materials are needed to build all energy production. What matters is what materials are used, how they are produced and how the environmental damage and waste from their production is managed. How to manage the dismantling of disused equipment and buildings, and how to deal with waste materials, are also important.

The production of steel and concrete is a major source of greenhouse gas emissions. Life cycle emissions from nuclear energy production are mainly generated during the construction of the plant.

High-tech products, such as gearless wind turbines and photovoltaic panels, also require many rarer materials, some of which are toxic in themselves or use toxic and otherwise harmful substances in their processing. Some types of panels, for example, contain toxic cadmium, although much less than the equivalent amount released by burning coal. The manufacturing process for silicone-based panels, on the other hand, produces toxic and highly potent greenhouse gases.

The number of obsolete solar panels has been low, but as the panels installed in recent years start to age and fall into disuse within 20-30 years, we have a very large and growing waste management problem on our hands.

The fuel just removed from the reactor is very hot and emits very strong radiation. This is why it is first cooled for decades in water pools. The radiation and afterheat production of spent fuel rapidly decrease - the more active the fuel, the shorter its half-life.

In Finland, spent nuclear fuel is disposed of deep in the bedrock. To the best of our knowledge, this will not pose any health risks to current or future generations. Disposal and future decommissioning of the nuclear power plant will be financed by a share of the price of nuclear electricity that will be collected and financed.

By far the largest part is the U238 isotope of uranium. It is a mildly radioactive and toxic heavy metal. Less than 5% of the spent nuclear fuel is highly emissive fission products. Most of them will be virtually eliminated within a few centuries.

The graph below shows the half-life and loss of different substances in spent fuel, and the decrease in radioactivity over time.

The figure shows that the radiation dose from spent fuel to the environment is decreasing rapidly, especially for fission products. Although spent nuclear fuel is extremely dangerous fresh out of the reactor, it also has many advantages over many other wastes from energy production:

Risks associated with the disposal of nuclear waste

In Finland, Posiva is developing and building a geological disposal facility for its owners. According to Posiva's studies, even in the worst-case scenario, the geological disposal will result in very low additional human exposure, around 0.00018 millisieverts. An equivalent annual dose can be obtained by eating a few bananas or smoking a few cigarettes in a year. The average annual radiation dose for a Finn is 3.2 millisieverts.

We use cookies to enable you to use the service, to display ads, to track and analyse ads and to improve our service. By continuing to use the site, you agree to our use of cookies. Read more
OK
Manage consent

This website uses cookies to improve your experience while you navigate through the website. Out of these, the cookies that are categorized as necessary are stored on your browser as they are essential for the working of basic functionalities of the website. We also use third-party cookies that help us analyze and understand how you use this website. These cookies will be stored in your browser only with your consent. You also have the option to opt-out of these cookies. But opting out of some of these cookies may affect your browsing experience.
Necessary Always Enabled
Necessary cookies are absolutely essential for the website to function properly. These cookies ensure basic functionalities and security features of the website, anonymously.
Functional
Functional cookies help to perform certain functionalities like sharing the content of the website on social media platforms, collect feedbacks, and other third-party features.
Performance
Performance cookies are used to understand and analyse the key performance indexes of the website which helps in delivering a better user experience for the visitors.
Analytics
Analytical cookies are used to understand how visitors interact with the website. These cookies help provide information on metrics the number of visitors, bounce rate, traffic source, etc.
Advertisement
Advertisement cookies are used to provide visitors with relevant ads and marketing campaigns. These cookies track visitors across websites and collect information to provide customized ads.
Others
Other uncategorized cookies are those that are being analysed and have not been classified into a category as yet.
SAVE & ACCEPT